After a mid-season break, round three of the Downhill World Cup rolled into Maribor, Slovenia. A high-speed track with a hot and sunny forecast would allow for fast and frantic racing. The team was well rested and ready to go. 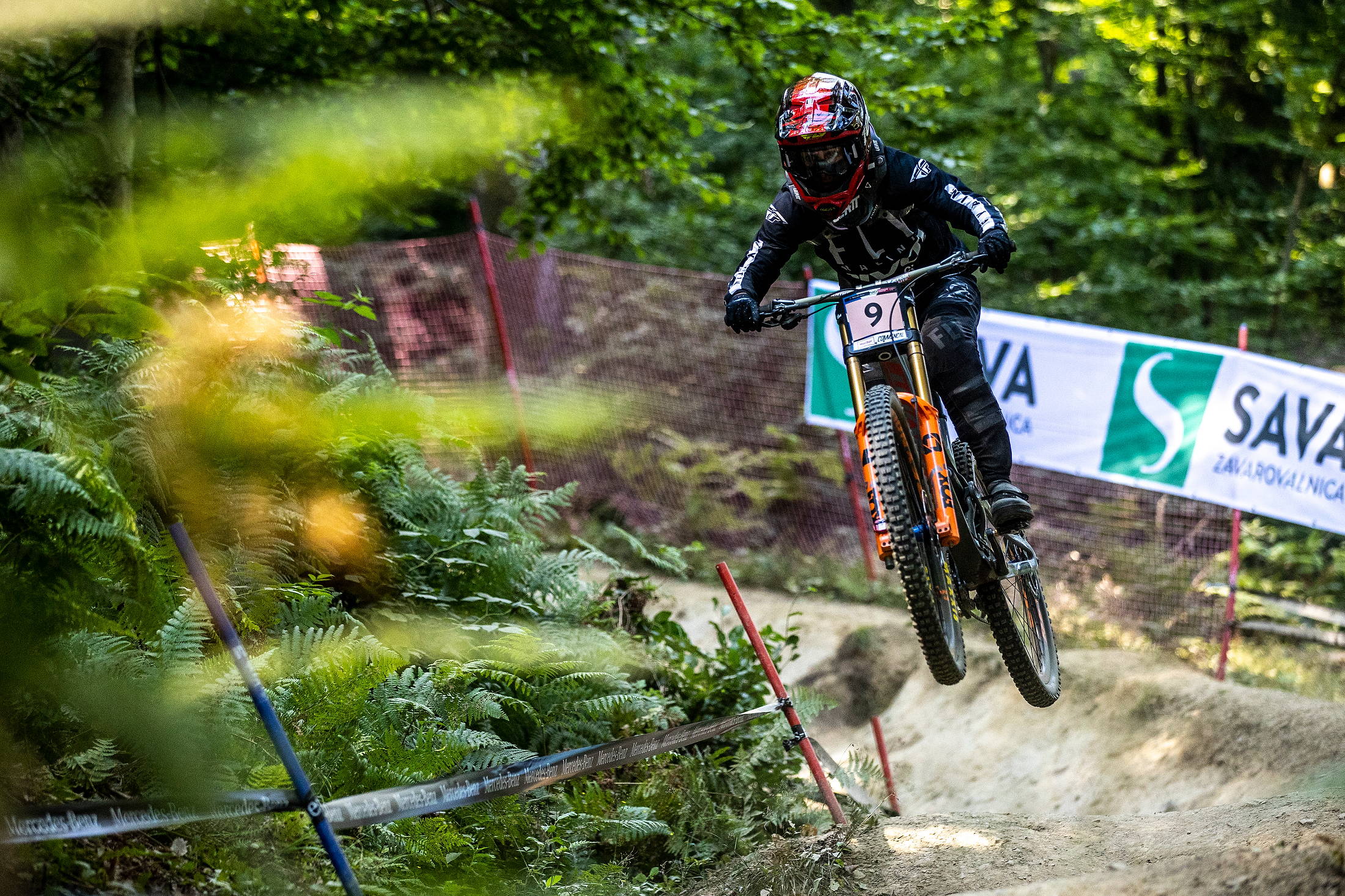 A sunny and hot track walk saw riders greeted with a new start jump and turns. This was welcomed by all riders especially Bernard; a jump early in the track lets the riders settle in and get pumped for the rest of the run.

Changes to the taping in the woods, although they seemed small, would alter the speed and direction riders entered each section and change the dynamic of the track. The track did not lose its main characteristic and feel. Riders who could generate speed top to bottom by pumping and jumping the terrain would produce the fastest time.

The classic rock garden remained but with taping changes to last year’s race. It was another head scratcher for the riders. Bernard was pumped to see the ‘triple’ was still there from 2020. A big gap over three compressions kept things exciting in the middle woods.

The biggest changes to the track came in the last 20 seconds. A small drop into the old pit area and a final 90-degree corner on asphalt opened up into a huge finish and spectator area. 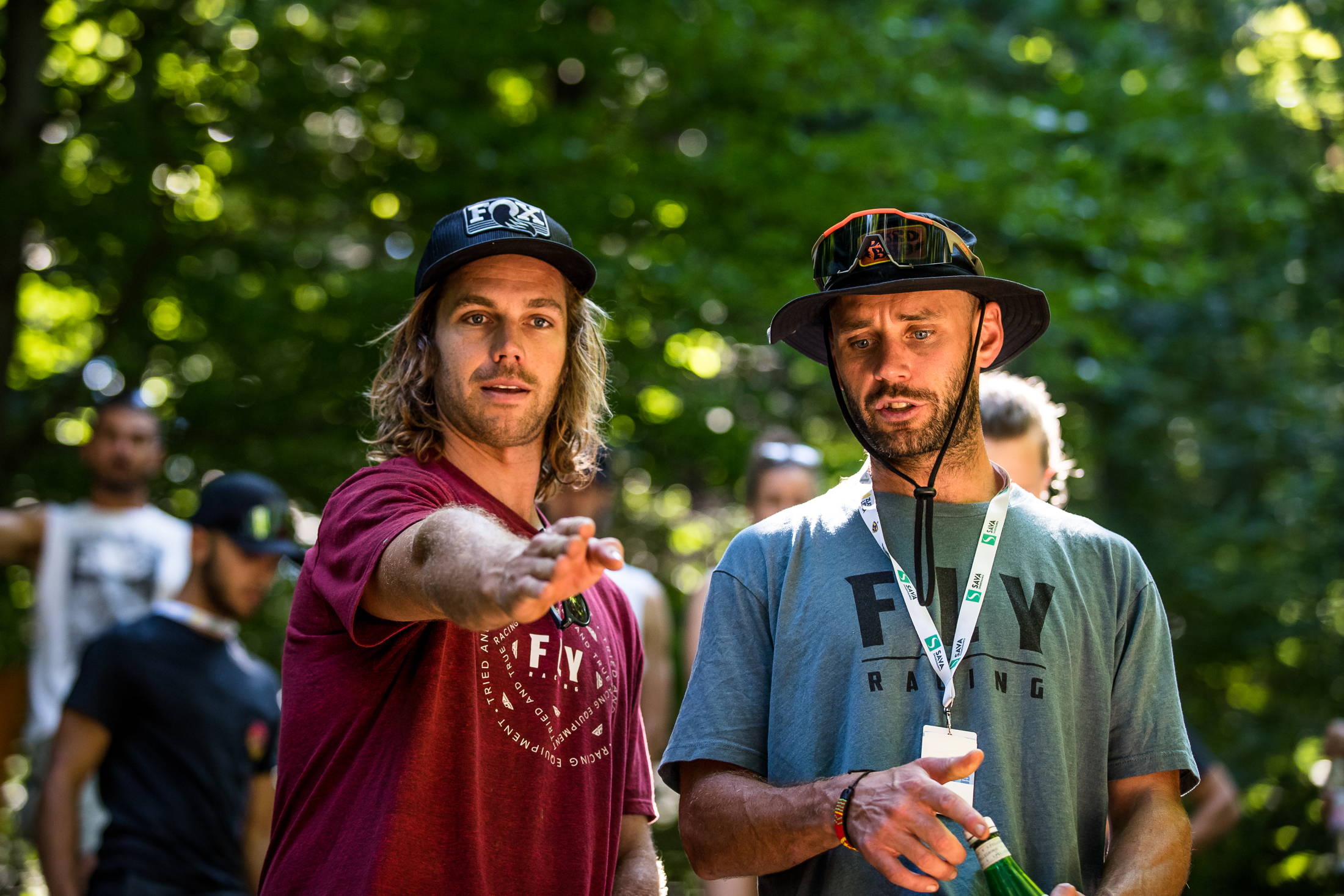 Training started and riders were getting up to speed and finding the limits on the dry and blow out track. A super wet European summer had limited the team’s opportunity to train in similar conditions but they were pushing on.

Bernard was feeling confident after the summer break and a third victory at Red Bull Hardline. Enjoying the high speed track, he was trying to predict how the track would change and deteriorate with the traffic over the weekend.

Eddie and Matt were puzzling together, working on some sneaky lines to avoid the biggest holes and blown out berms. Matt ticked off the big triple gap in the lower woods. After missing the 2020 race through injury it was his first time seeing and racing this much talked about section of track.

Emilie was building speed nicely on her first few runs of the day. A few small crashes later on did no major damage but shows just how fine the margins for error were in these conditions.

The day finished on a bummer with Bernard taking a trip to the hospital. Sliding out on one of the flat, open turns on the ski piste, he caught his finger on the floor. With his finger swollen and unable to hold on, Bernard headed for an X-ray and was unable to continue racing over the weekend. 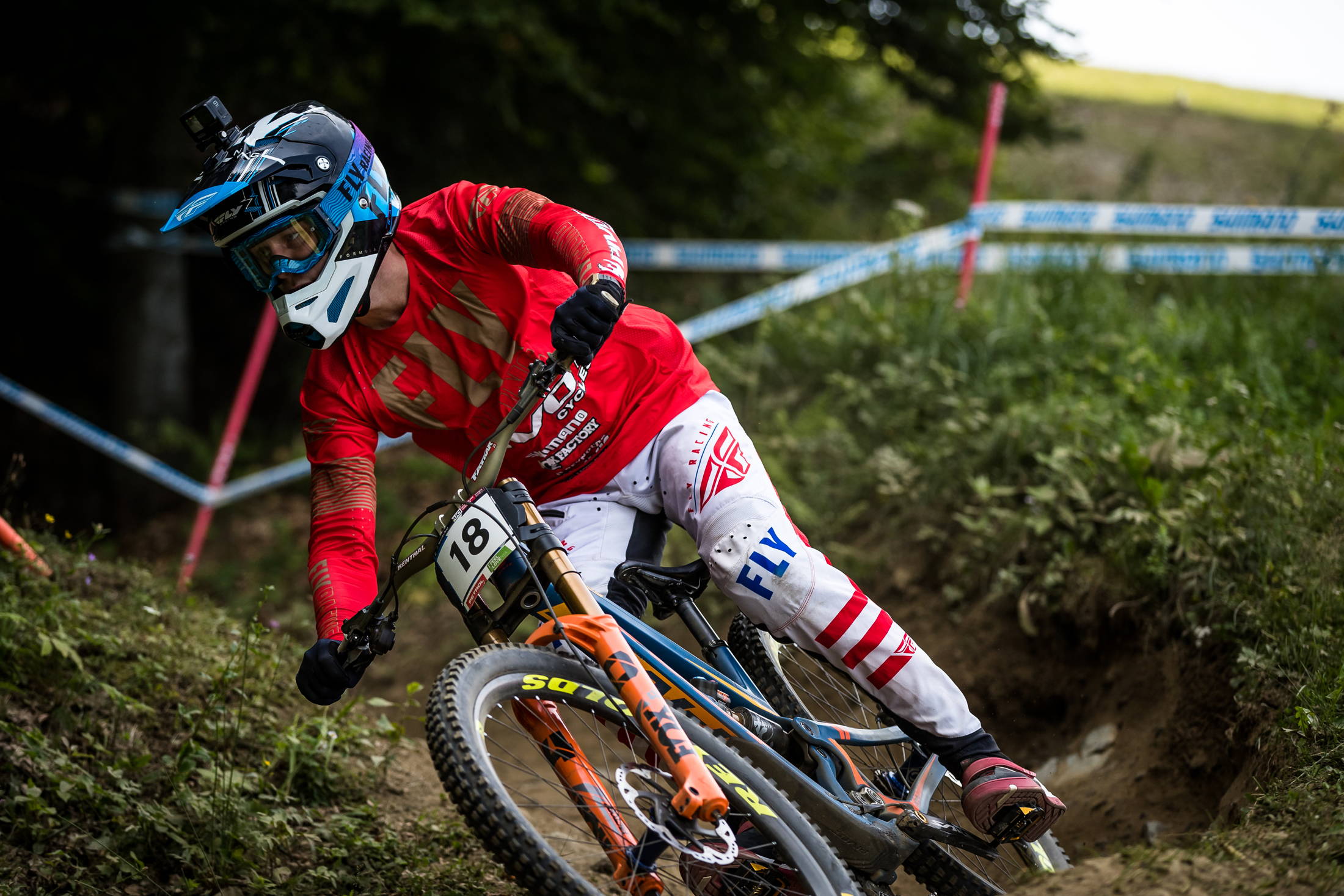 After a few dirt naps during training, Emilie was still a little sore and stiff. With qualification protection she played it safe. Taking a solid run with no mistakes she qualified 15th fastest. Not an amazing run by her own account but enough to make the main show on Sunday.

Matt knew it would take a fast and committed run to make the qualification in an increasingly tight and competitive field. With a fast first few splits he was looking on track for a solid time when a big hole in one of the fast berms jolted his shoulder.

Struggling to get on with the dry and blow out conditions and having to ride the last half of the track conservatively, Matt missed out on the finals by only 2 seconds.

Sam was once again learning a lot from racing and riding with the team. Picking up speed throughout the weekend he was feeling good on the fast and blown out track. Struggling to find the flow and put a good run together, he was unlucky to miss out on qualification for the finals by a few seconds.

Eddie sprinted out the gate and rounded the first turn. Squashing the first jumps before disappearing into the woods he was looking pinned. After a fast first two splits Eddie started to lose time, hitting some of the big holes and struggling to put it together. He qualified in the top 40 and was hoping for more come Sunday. 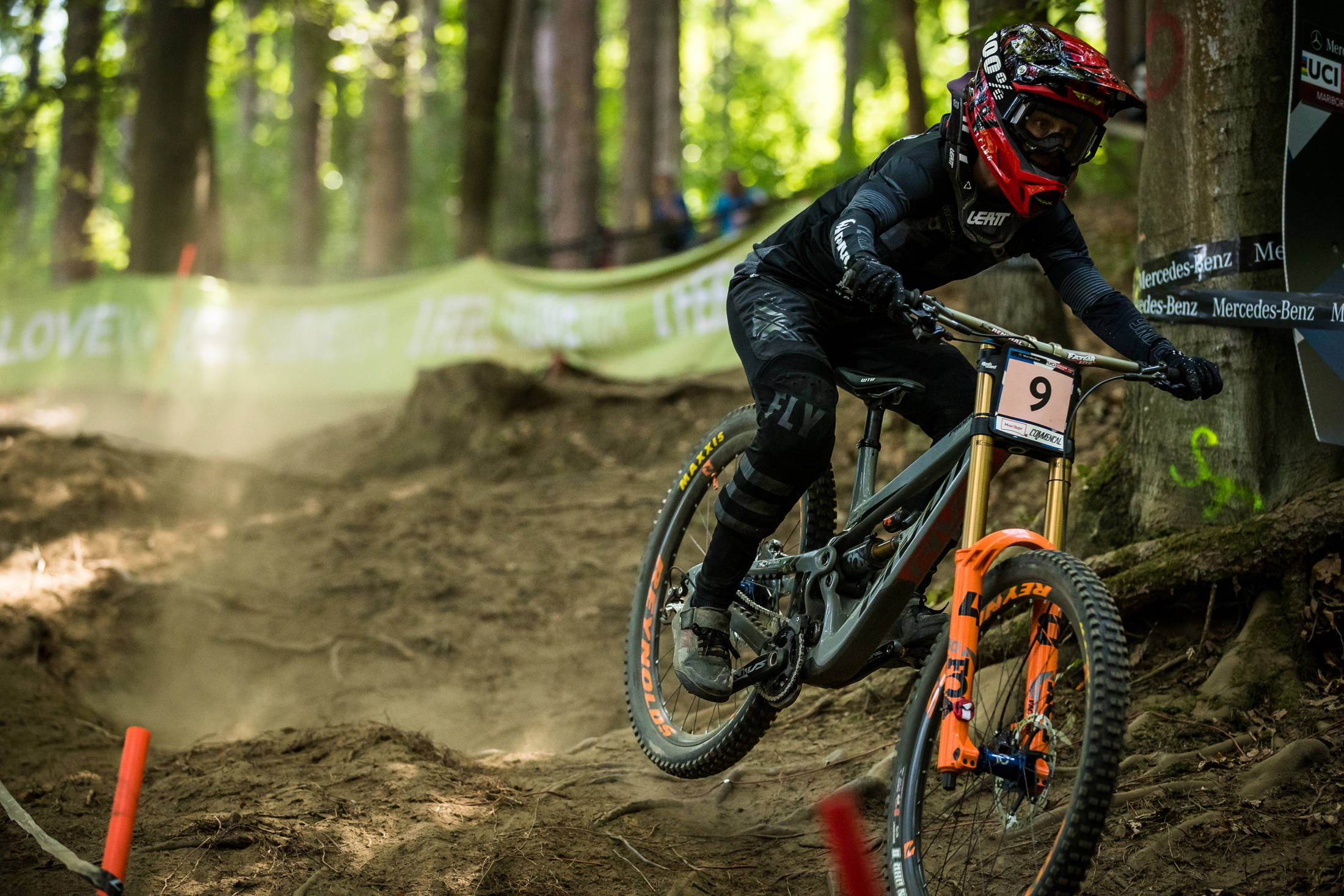 A tough weekend for the team was made even harder with Eddie catching a pedal and taking a big slam in his last training run before finals. With a suspected separated shoulder, he was taken to hospital for a check over and further x-rays.

Multiple crashes and injuries left Emilie flying the flag for the team in the finals. After a safe qualification she was keen to push hard and leave it all out on the track. With crowds well and truly back at the races it was great to feel the noise and atmosphere build throughout the weekend, peaking for the finals.

Emilie was visibly pushing hard on the big screen as she started her run. Carrying good speed through the rock garden and then hard on the pedals on the following straight Emilie crossed the line 6 seconds faster than her qualli time. Finishing the weekend in 12th Emilie was happy with how she rode on a track that doesn’t suit her strengths or physique.

It was a warzone out there and a tough weekend all round for the team. Spirits are still high despite the setbacks and the riders are already focusing on recovery and returning to racing as soon as possible.

Bernard is hoping to be fit to ride the World Championships in two weeks’ time while Eddie is still awaiting further updates but looks likely to miss the next few races.

As always, a huge thanks to everyone for the support along the way to make these weekends racing possible! 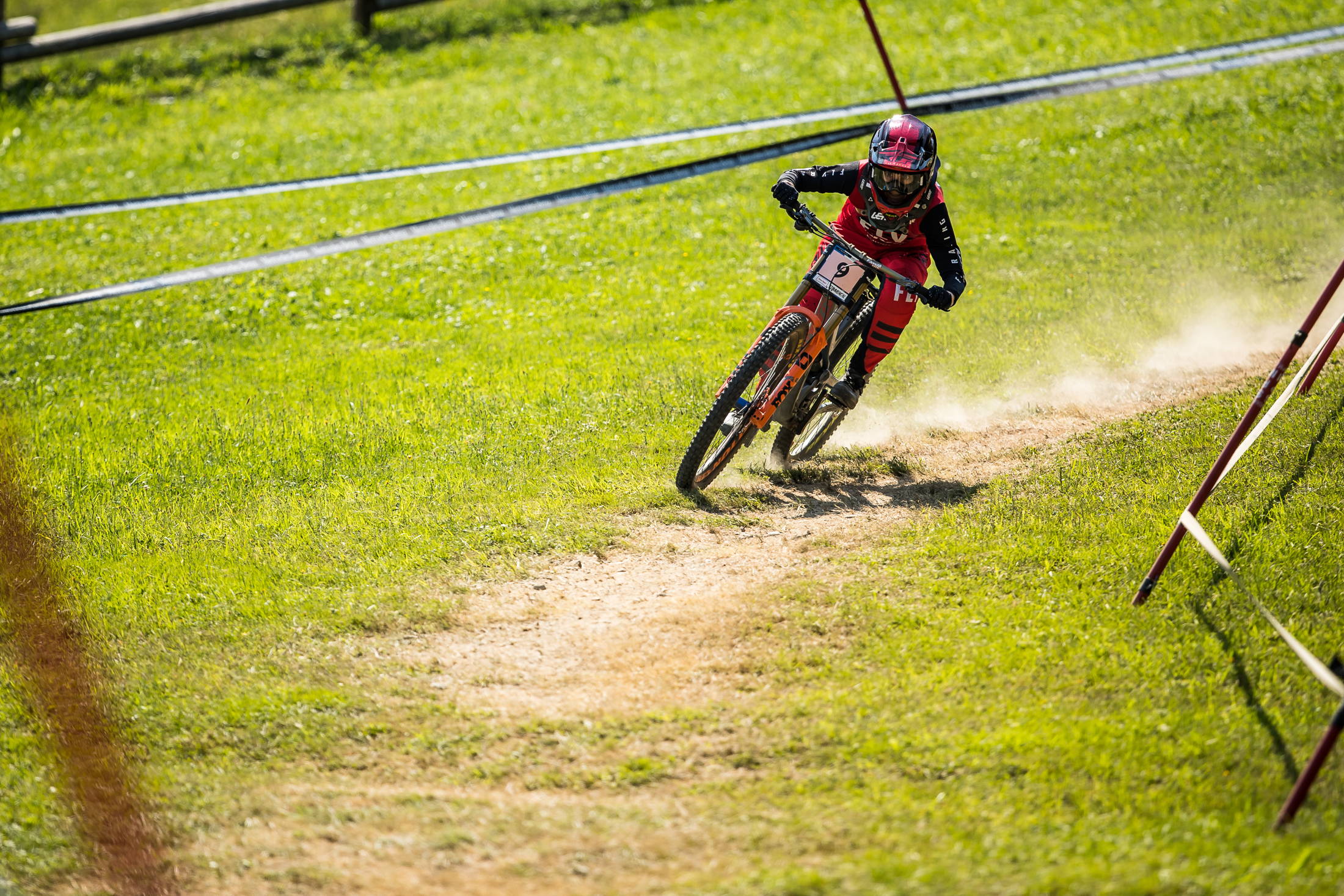