After a muddy World Championships the team was straight on the road and straight into a double header round at Maribor in Slovenia for round one and two of the UCI Mountain Bike World Cup.

The track in Maribor is well ridden and more hard packed than Leogang, and this was expected to hold up to October conditions well. On track walk, the riders were looking at lines from last year, and with few changes there wouldn’t be much puzzling on the lines to ride on the main track.

One spaner in the works was the track changes for the second round. With track one and two mainly the same, there were three split sections along the track for round two. More twists and turns on the top woods section would add some time onto race two but bigger changes came on the third split section. Wide open and freshly cut into dirt and loam with some off camber sections, it would be interesting to see how the riders would deal with learning two tracks and new sections over the weekend. 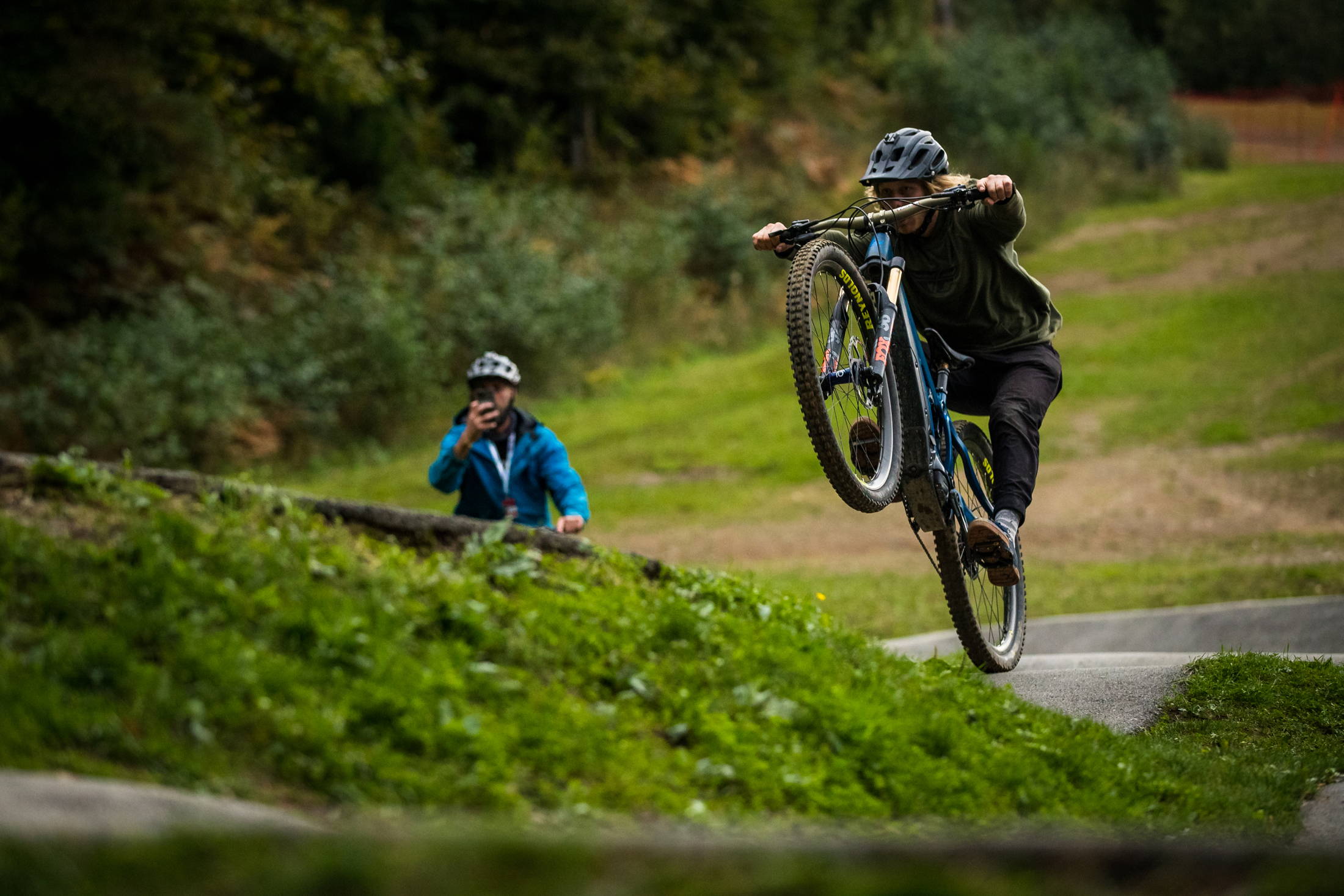 Training got off to a fast start. With training for round one on a very similar track to last year and good conditions, riders were up to speed in no time. When Bernard comments how gnarly fast everyone is going after one run you know it is fast!

Eddie had the worst start to the weekend imaginable. Hitting one of the high speed gaps his rear wheel slid on landing. Struggling to control the speed he was spat off track into the trees, injuring his wrist. A quick X-ray in town showed a small bone chip from a previous injury. Doctor's advice was to keep riding with heavy strapping and some pain killers.

Bernard was loving the high speeds. Taking 6 runs over the day he felt up to speed and knew it would take full commitment for a high placing. 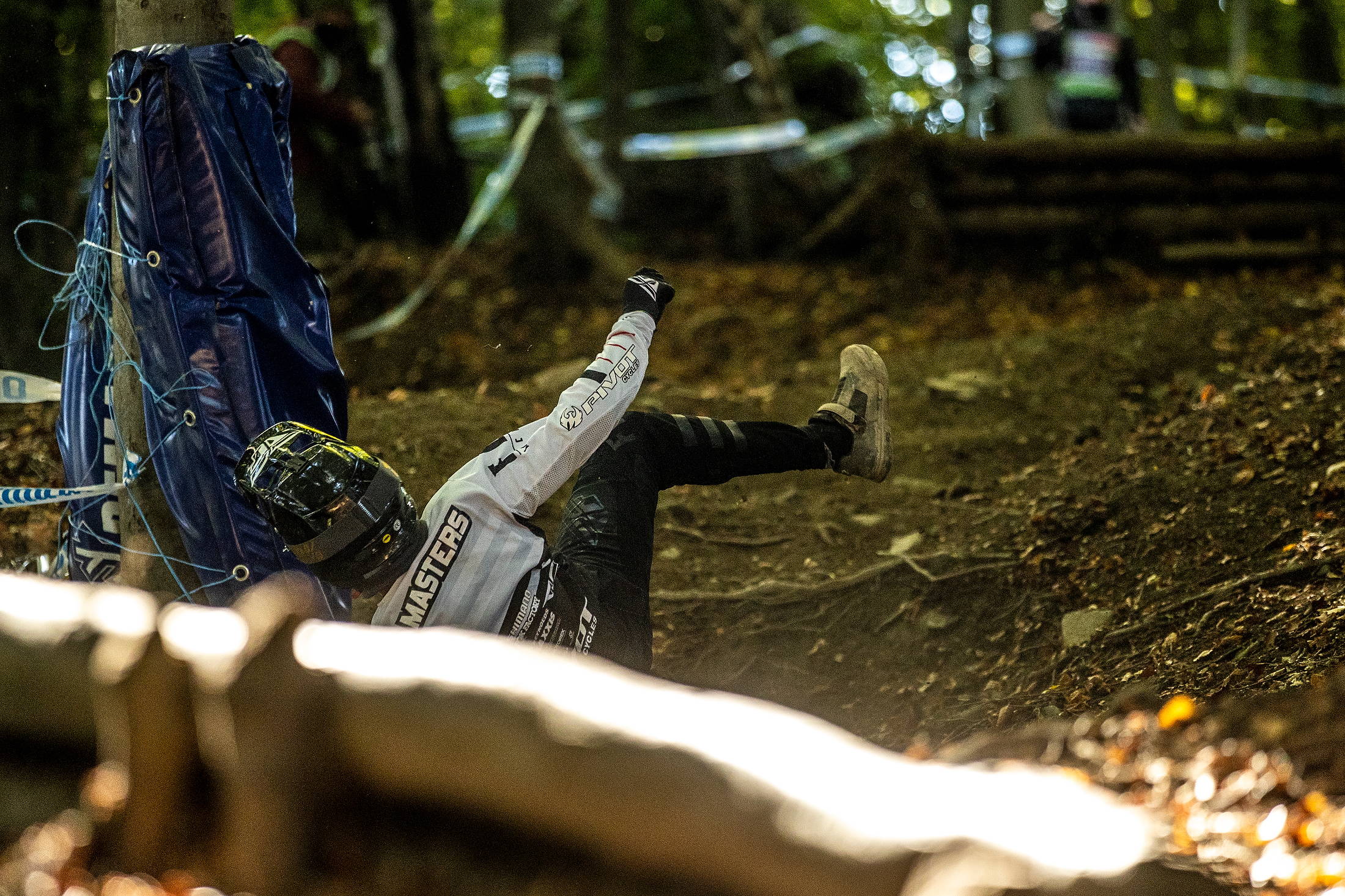 Heavy rain for morning training somehow got even heavier for the qualification runs. Eddie was pleased with the rain as it would slow speeds down and reduce the stress on his injured wrist.

Eddie put in a safe and solid run to qualify in thirty ninth. Not the speed he wanted but happy to get through a wet and cold qualification with an injury.

Bernard dropped in just after Eddie. Chasing him down the track both riders enjoyed the wet conditions. The extra rain had in fact helped with ground conditions, ‘riding the river’ exposed the hard ground under the wet slippery mud and allowed the riders to push hard.

Bernard played a safe game, saving both energy and risk. Crossing the line in seventh his time would eventually be twenty eighth fastest. 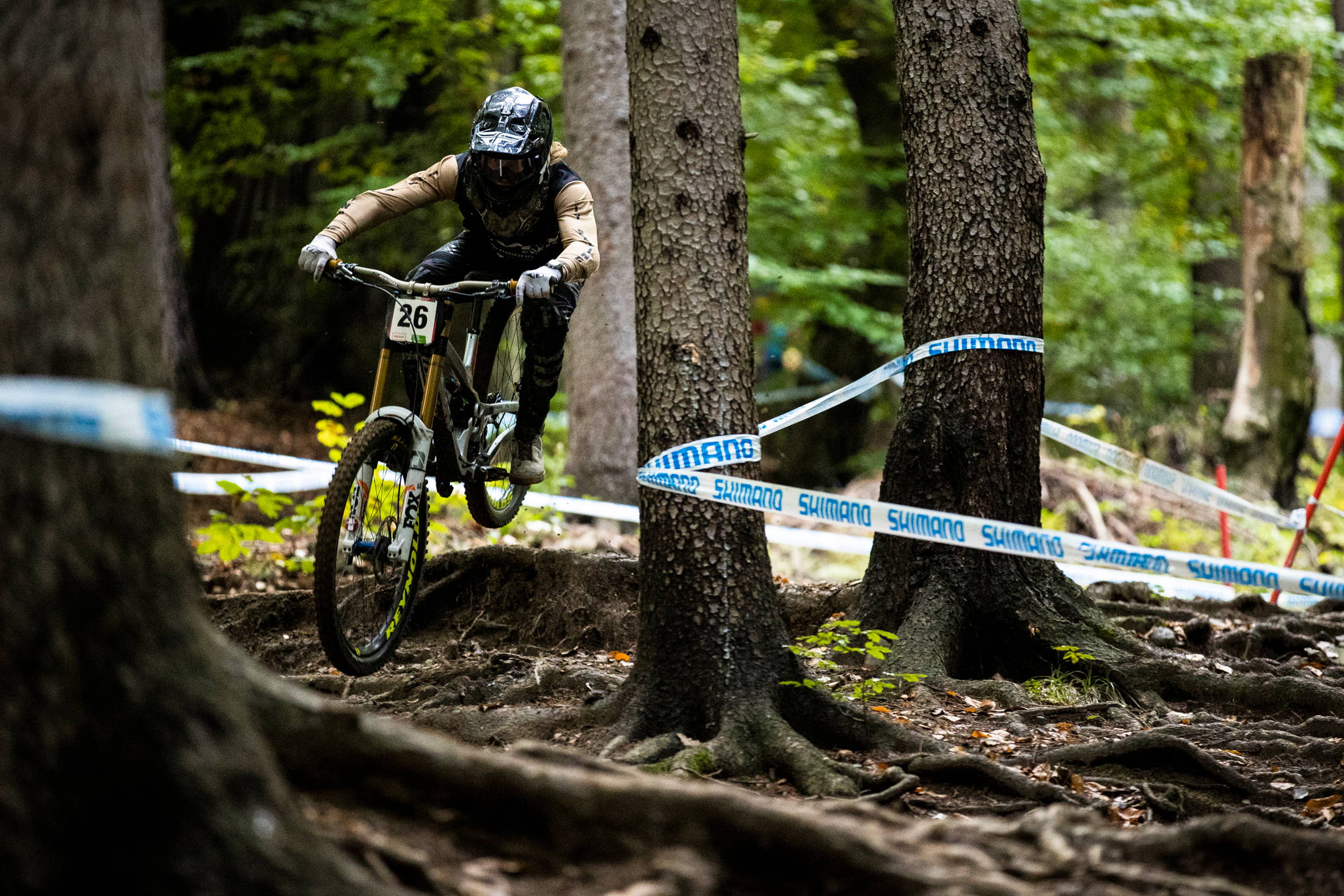 The rain had started to clear up for finals but this only made the track more challenging. The softer track was retreating, and the sticky mud was getting dragged onto the roots.

Eddie was still riding with a heavily strapped wrist, but this didn’t slow him down. Having a wild run with lots of close saves he was happy to make it down the hill safely and finished a great twenty third considering the set backs.

Bernard was the first rider on the live feed. Drifting a bit too much on the super muddy first corner and losing some time he gained more and more time back as the run went on. Crossing the line in first with a three minute, seventeen second run he was pleased to go fastest with an admittedly messy run.

Track conditions remained consistent for the rest of the field to finish, eventually pushing Bernard into thirteenth. Happy with the result from runs, with some mistakes both riders were confident for racing again the next day and pushing even harder. 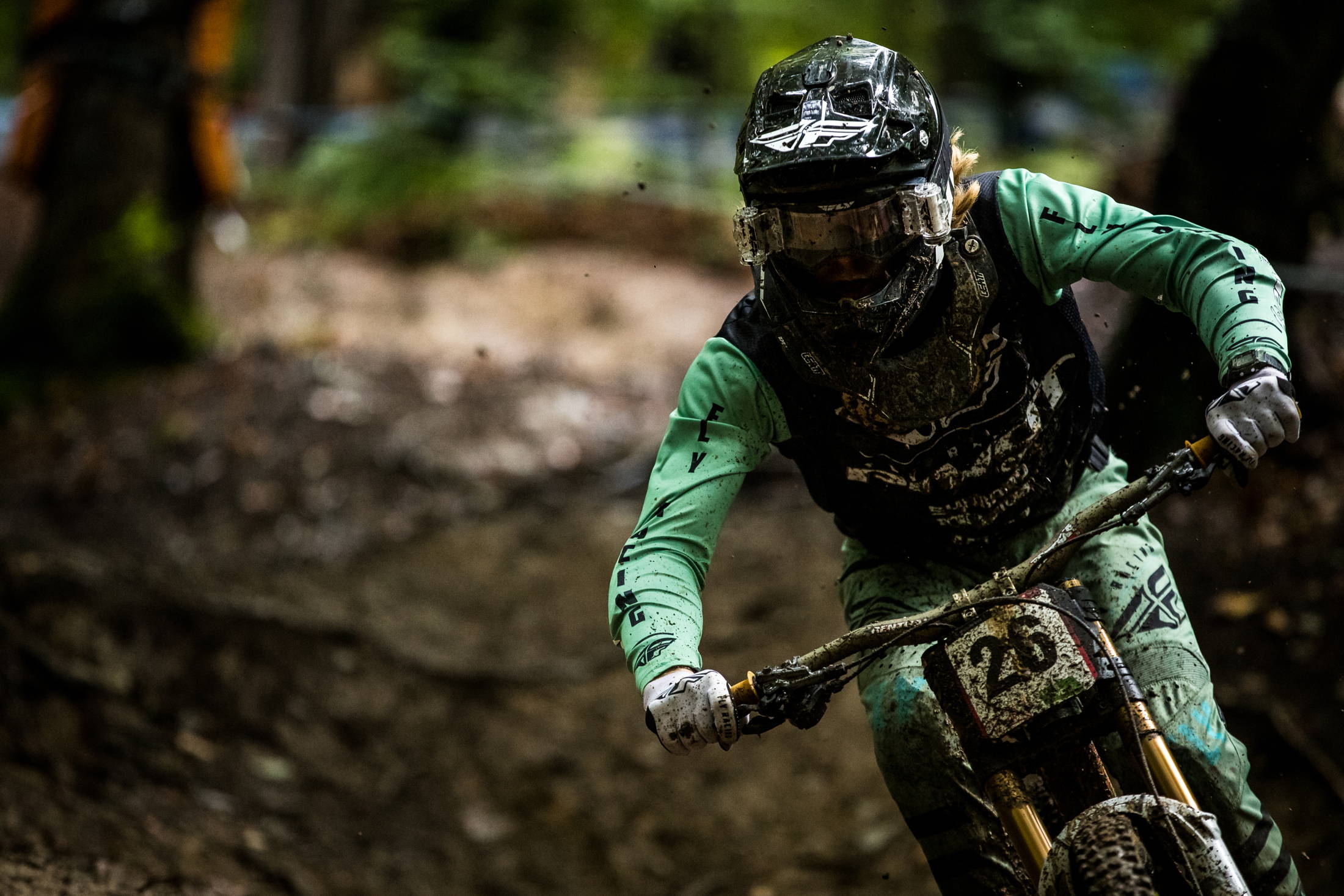 No rest in the strange 2020 season and a second qualification day followed straight on from Round One. Slight track changes with split sections from race one and some poles moving in the famous Maribor rock garden would keep the riders on their toes in the one training before qualification.

Eddie was pushing hard in his qualification run and lost his front end coming into the rock garden. Bull riding the bike all the way through, and almost coming to a stop, it was a wild ride and good save. Fast on the first two splits but losing lots of time with the mistake, he qualified in fifty second.

Bernard was still focused on building speed for finals. As a protected rider and guaranteed qualification, he kept the runs tame and consistent, qualifying in twenty fourth, with more speed to come on finals day, it was a job well done. 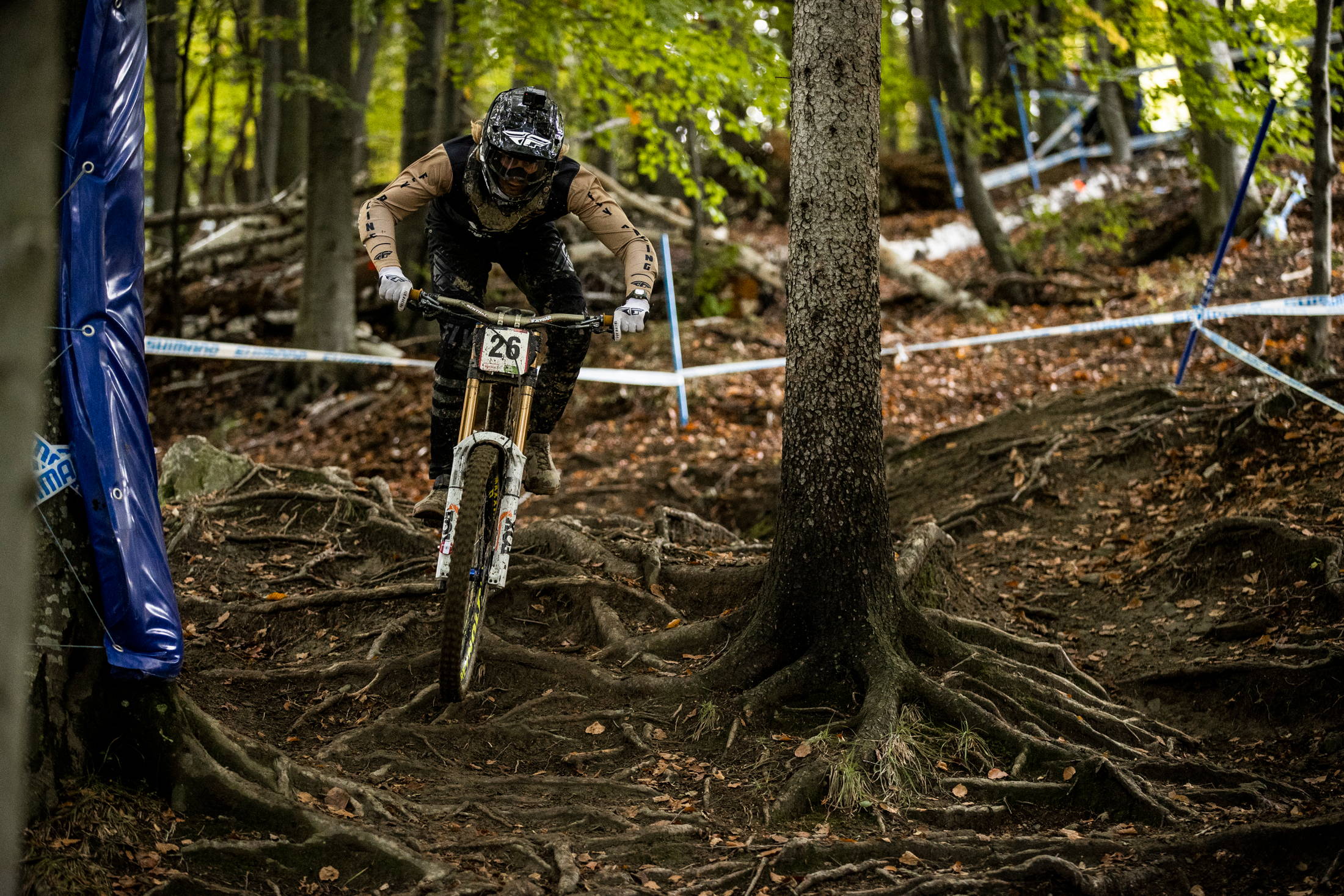 Bright sunshine on finals day meant the track was drying and getting faster and faster through training and finals. The riders were getting ready to push hard for one last time in this block for racing.

Eddie came down the hill looking fast, going green on all his splits and carrying great speed on the key section through the rock garden. He crossed the line over two seconds up on the fastest time but with a long wait for the rest of the riders to finish.

Bernard’s run got the heart pumping. A fast start had him within half a second on the first two splits with his stronger part of the track still to come. He was pushing hard until a flat tire before one of the high-speed compression filled straights. On the straight, the tire and bike lost grip and spat him straight into the floor. A hard body slam caused some concern from the bottom of the track, but Bernard was back up and finished his run. Battered and bruised but with no serious injuries, some rest and recovery should see him back to 100%.

Eddie's time was good enough for thirtieth place, a few mistakes costing him time in a very tight race. However, two good results over a busy weekend and all while nursing an injured hand made Eddie a happy man leaving Slovenia.

A quick mention for Charlie Murray who the team have been partially supporting through the Enduro season and who tried his hand at downhill, very successfully. Qualifying for both finals and finishing off in forty sixth and forty eighth at his first taste of Word Cup level racing.

The team is heading back to the UK for a much needed deep clean and to get ready for the next World Cup Round planned for Portugal in a few weeks time. 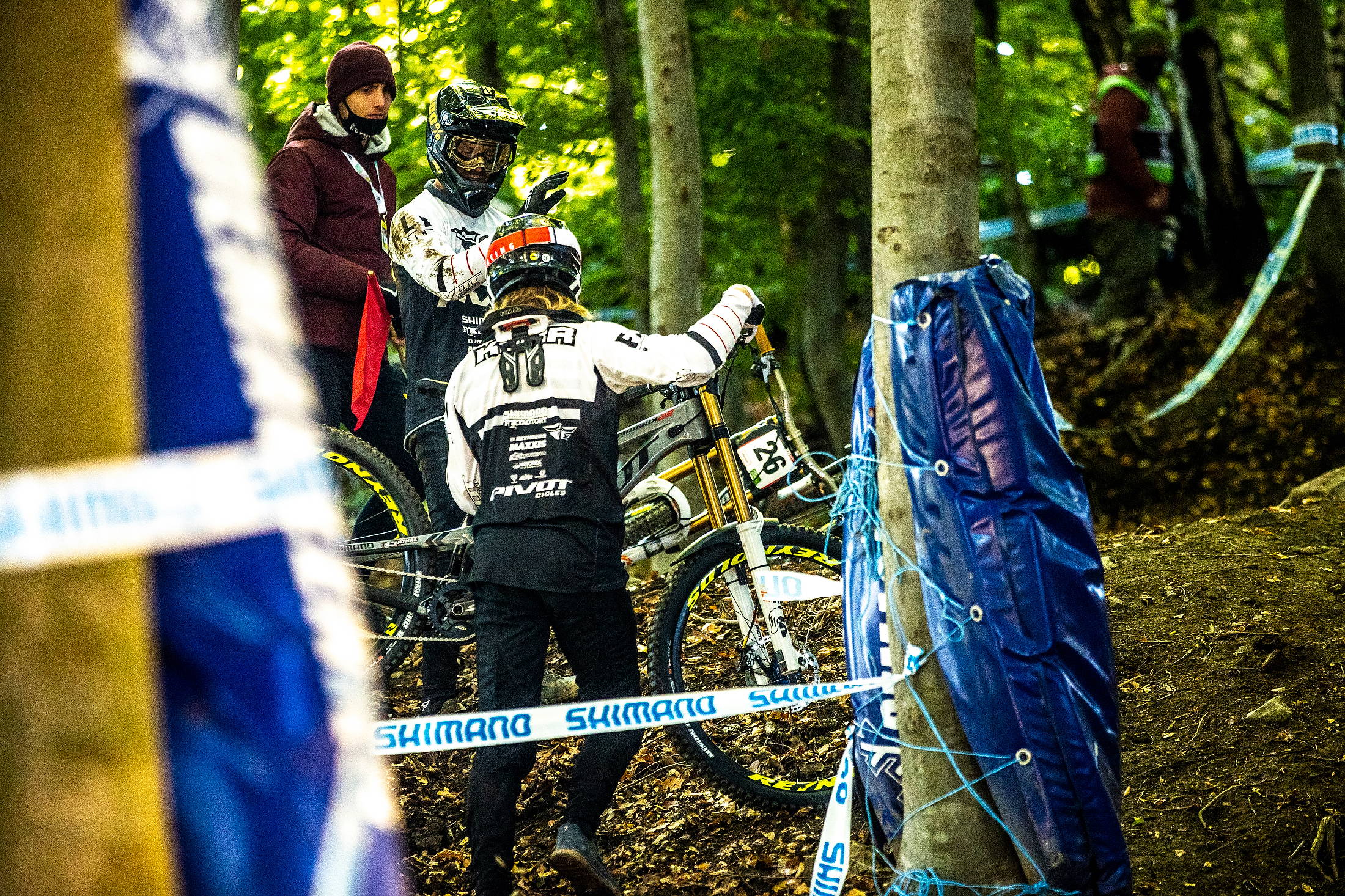 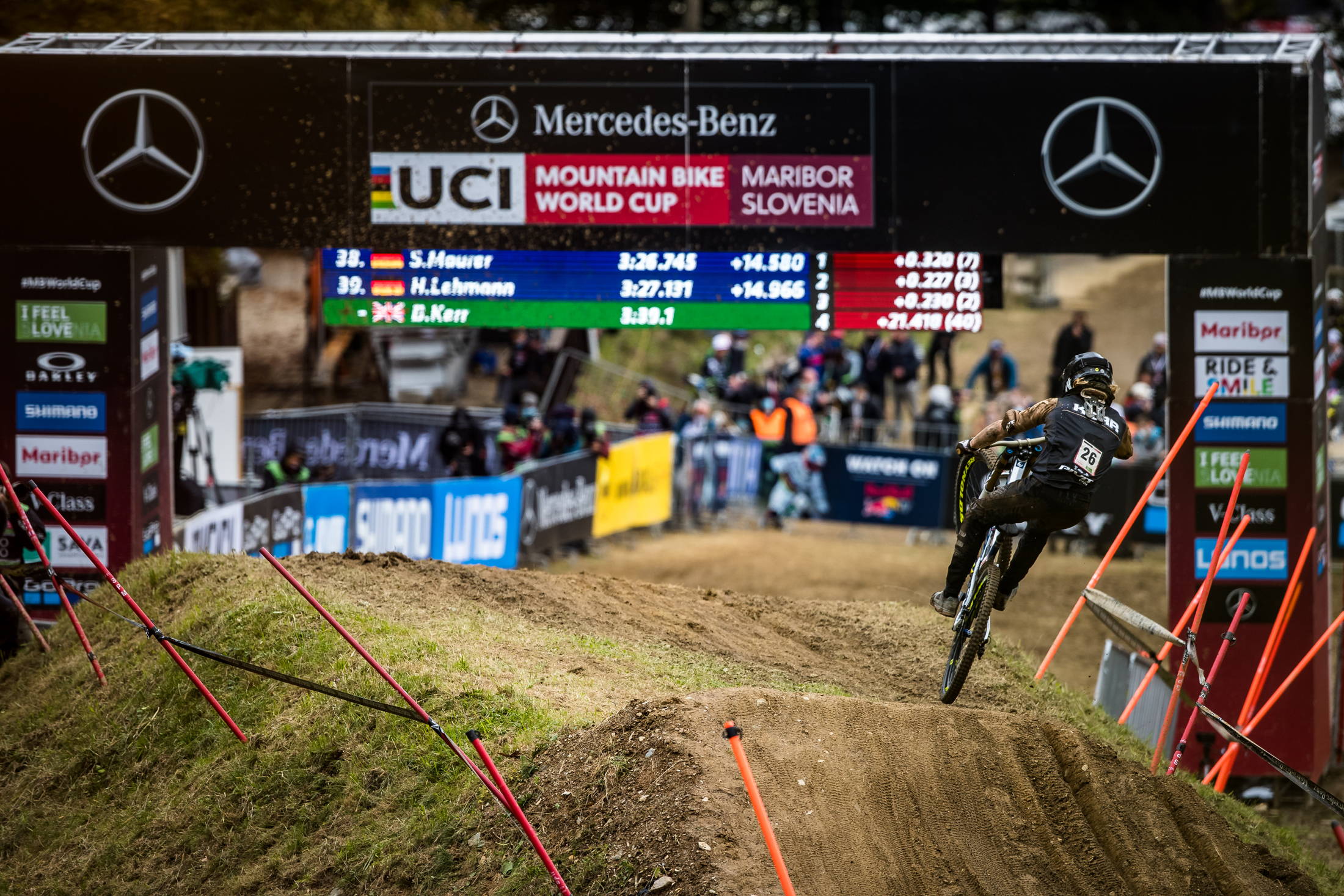