Coming in hot straight from a successful Innsbruck Crankworx, the team was super keen to get racing again. World Championships are always special with the team pulling on national jerseys and having the honor to represent their home nations, and for 2020 all our downhill riders were selected. 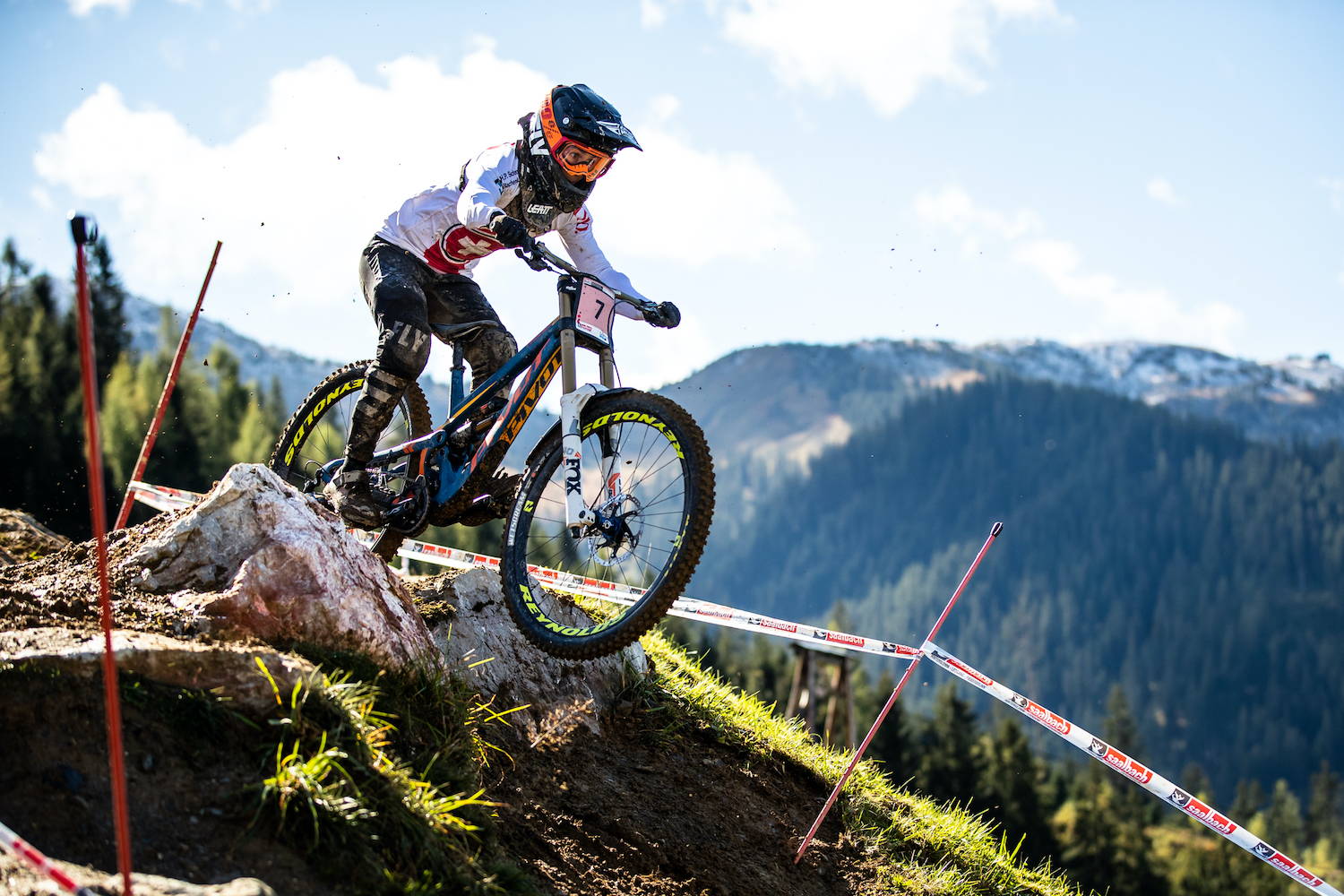 Track walk was a soggy affair, both underfoot and from the sky. Some taping changes on the top of the track and soft ground made for a welcome change to the overly familiar Leogang track. More changes came after the fast motorway jumps and rollers with the track turning left and heading straight into some tight, steep, and muddy turns. Taped wide and after lots of rain, multiple line choices would cut in and make an interesting race.

Bernard and Eddie were loving the changes, both at home in the wet and slippery conditions, they could not wait to ride the track. 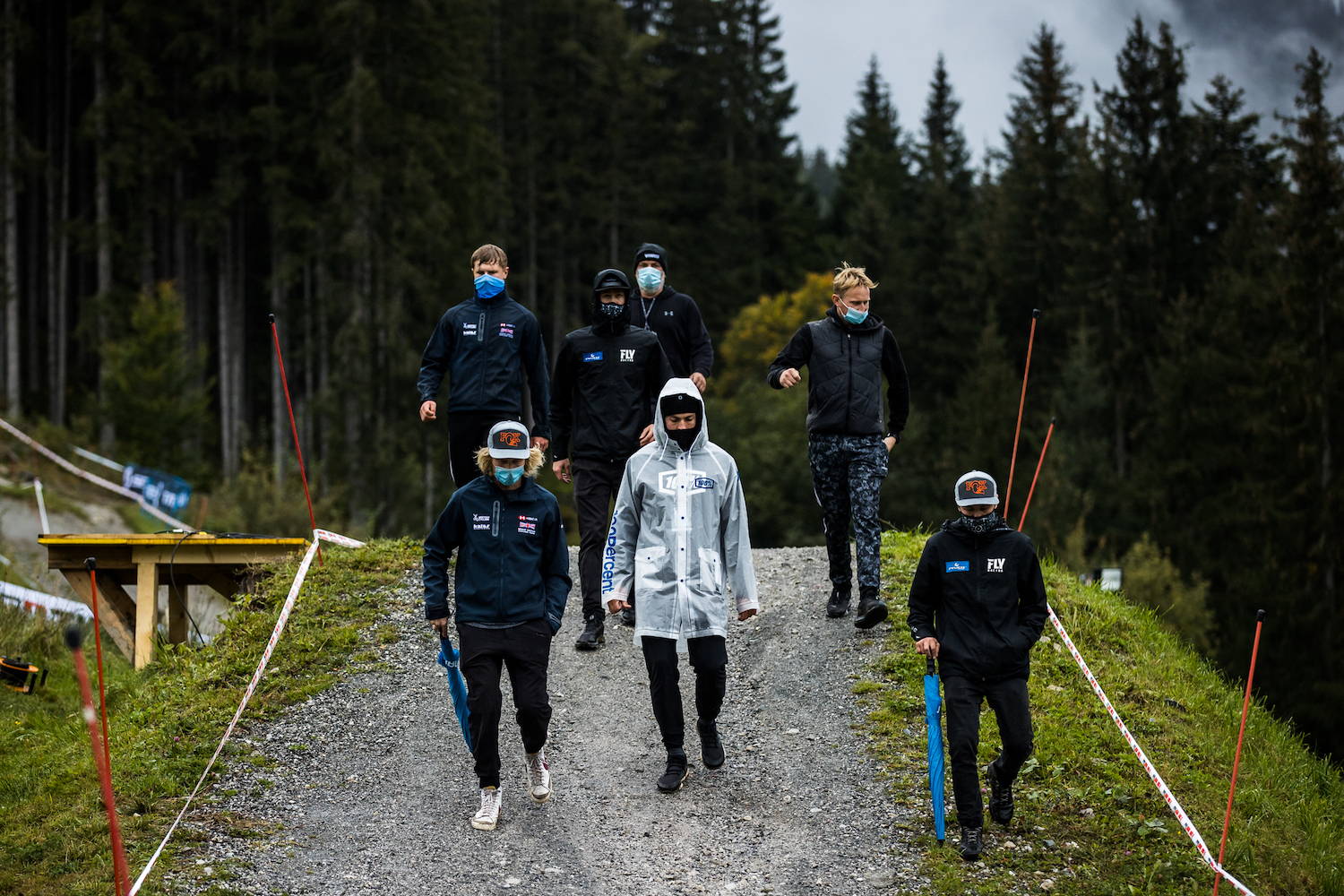 Training for Emilie started early in the morning after more overnight rain. The unridden track was proving slippery and lines were taking time to cut in as rider after rider was challenged by the conditions. The mechanics were going to be kept busy all weekend with filthy bikes needing washing off and preparing for each session.

As lines cut in and the track dried the mud became thicker and stickier. Bernard was loving the track, getting loose and up to speed run after run, he returned to the pits with a huge grin on his face.

Eddie was also relishing the tough conditions but the day ended with a crash, pushing a front wheel over a rut he hit the deck fast but luckily bounced back with no injuries and was ready for qualification the next day. 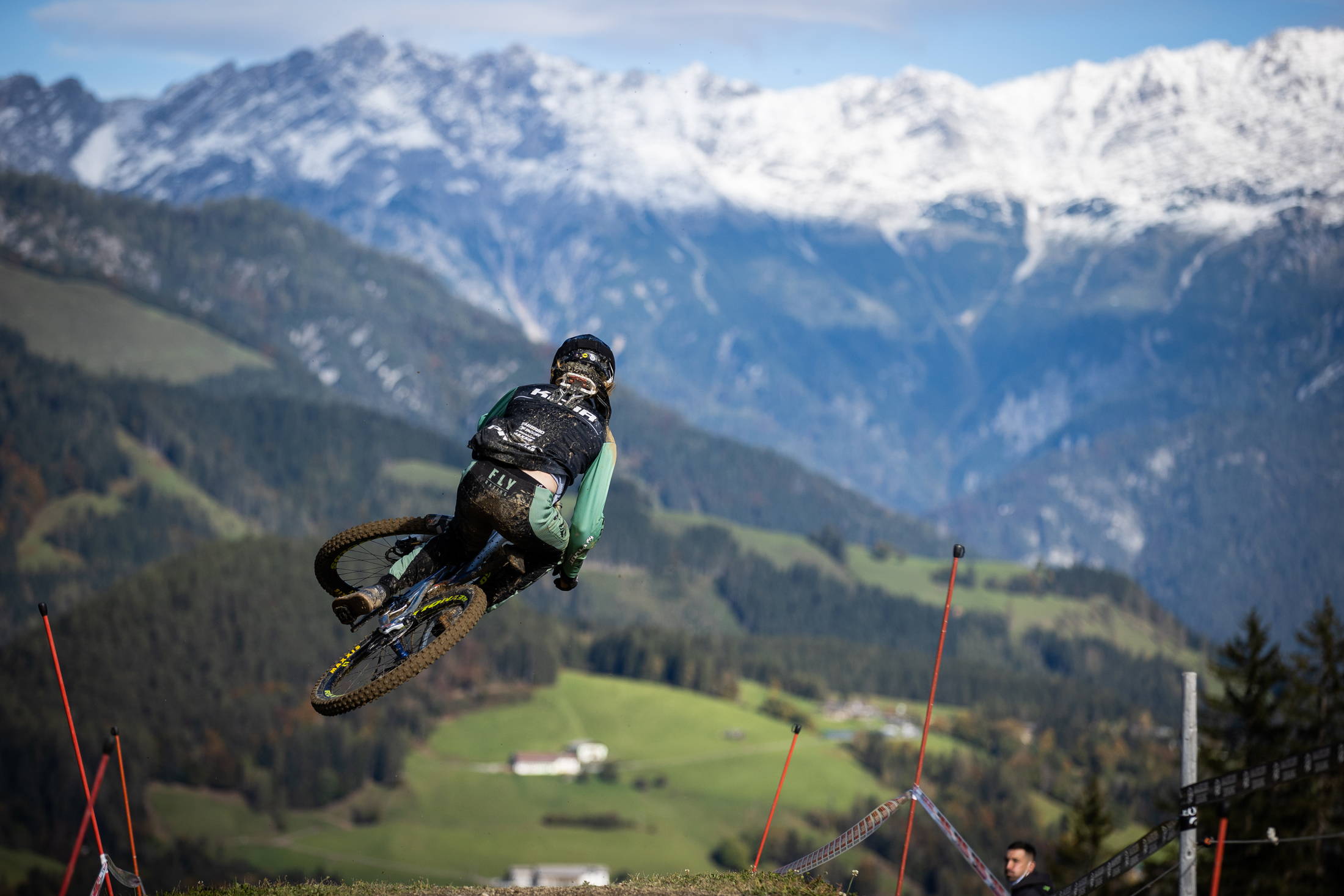 Morning training started even slippier with morning dew on the rocks and roots. Eddie and Bernard were having heaps of fun on the track and getting their race lines dialed in for the first timed runs of the weekend.

Emilie was riding strong but picked up an injury during a training run, catching her leg while unclipped, twisting her knee. Being a protected rider and feeling confident on the track she took the wise decision to not take her qualification run and rest up.

Course holds and re-runs delayed qualifying but when it came around it was a crazy affair. Riders coming down covered in mud, some with multiple crashes, some having caught the rider in front and very few happy with the performance.

Bernard started strong, fast on the first half of track he was up on the fastest time. Catching a rider coming into the tricky steep wooded section his concentration was broken and he slid out on one of the wooden bridges. Bernard was annoyed with the mistake but crossed the line in seventh. Finishing qualifying in seventeenth with a crash shows the speed is there come Sunday.

Eddie crossed the line into fourth. Frustrated with his run and struggling to keep his feet clipped in the pedals with the mud and rough track. Eventually qualifying twelfths for another good result despite eddies feelings on the run.

With another day of training on Saturday and heavy rain and even snow forecast for Sunday, it was still anyone’s race! 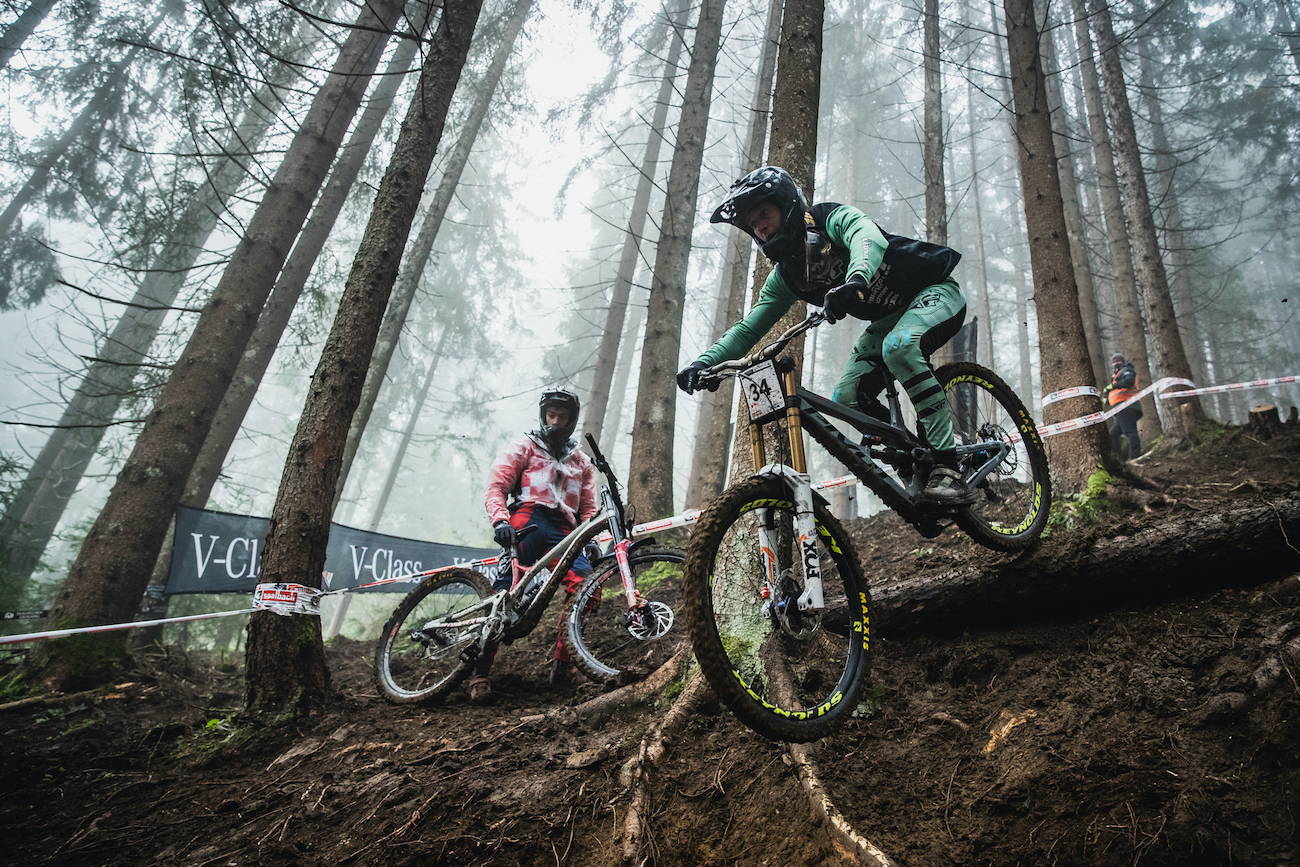 A drop in temperature and the heavy expected overnight rain came for finals day. Unfortunately, after more consultation on her knee, Emile would not take to the start. Wishing her a speedy recovery the boys headed up for the main event.

Treacherous conditions greeted the riders, with the rain fading but temperatures hovering just above freezing the mud started to get even thicker and slower. Keeping the wheels turning and staying upright was proving hard for all of the world’s best.

Bernard set off for his World Championship run with snow falling on the start hut. Attacking the first turns and powering on the pedals he was carrying good speed down the high-speed motorway section. Coming into the muddy woods he was still looking strong and within touching distance of the fastest time of the day. Making it clean down all the steepest shoots and axle-deep ruts Bernard came out the woods clean and crossed the line into second. 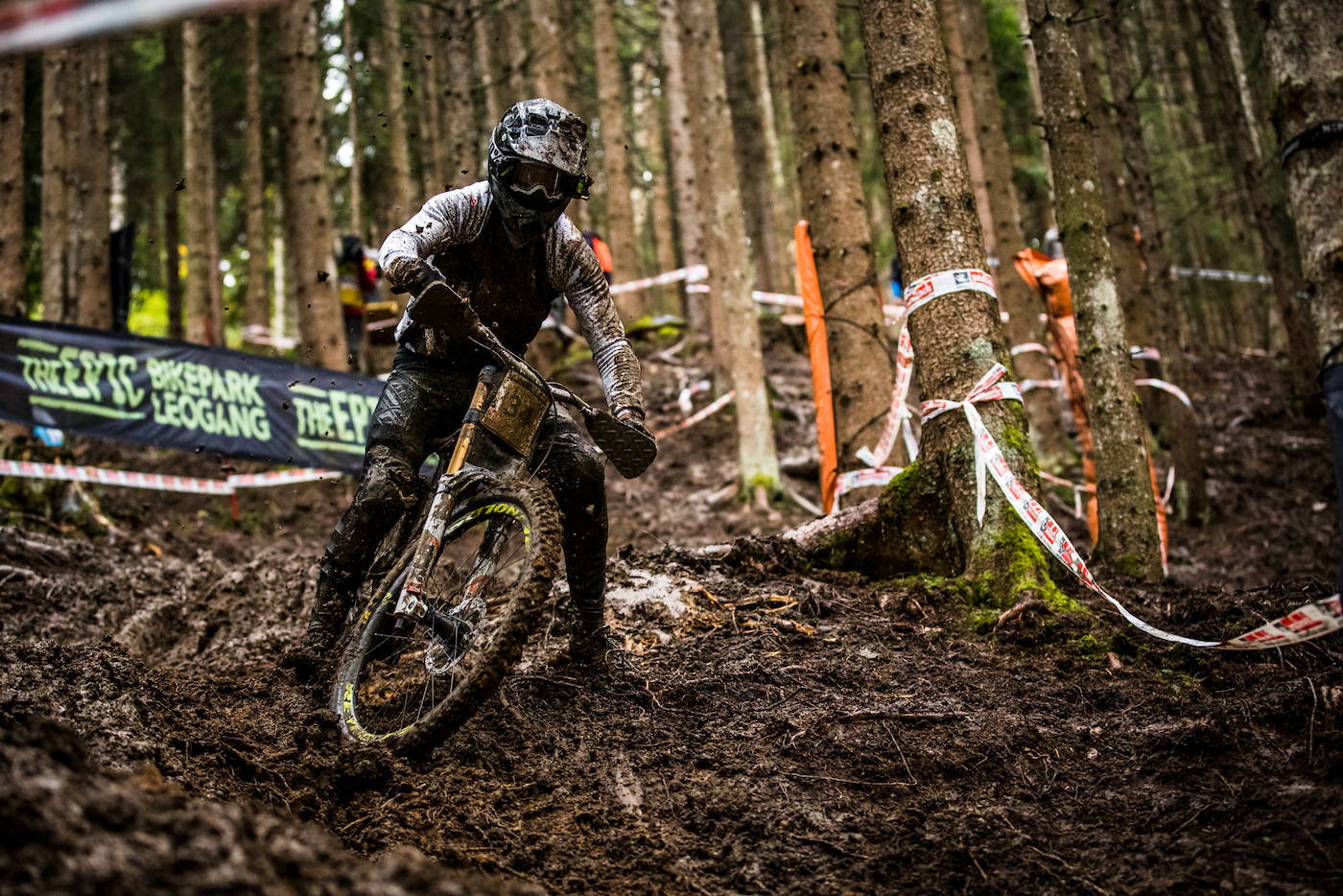 Eddie came down shortly after Bernard and with similar conditions. Posting good split times Eddie came into the woods fast. Hitting a rut better than ever he carried loads of speed into the next section. The extra speed and sticker mud made the next compression violent, stopping the bike and throwing Eddie over the handlebars.

Jumping up quickly Eddie was straight back on the bike. Safely making it across the line he finished off twenty-second.

With so many top riders struggling in the conditions, there was only a handful that managed clean runs. Bernard has been sitting in second for a long time with his mistake-free run. Only three riders managed to improve on Bernard’s time, finishing an amazing fifth and equalling his best-ever World Champs result.

After a cold, muddy but very entertaining race the team head straight to Slovenia for a doubleheader round of the UCI World Cup.